Most complex nanoparticle crystal ever made by design

by Kate McAlpine | Michigan Engineering | March 2, 2017
Extraordinary nanoparticle crystals are possible by harnessing particle shape in addition to using DNA as smart glue. | Medium Read
Bipyramid-shaped nanoparticles will self-assemble into the most complex nanoparticle crystals ever made by design. The shapes interact with one another as though they are larger and rounded because of the DNA strands extending from their surfaces, shown on the left. The middle box shows the bare bipyramids. On the right, the "ball and stick" model illustrates the clathrate structure.

The most complex crystal designed and built from nanoparticles has been reported by researchers at Northwestern University and the University of Michigan. The work demonstrates that some of nature’s most complicated structures can be deliberately assembled if researchers can control the shapes of the particles and the way they connect using DNA.

“This is a tour de force demonstration of what is possible when one harnesses the chemistry of DNA and combines it with nanoparticles whose shapes encourage a particular crystal structure,” said Chad A. Mirkin, the George B. Rathmann Professor of Chemistry in the Weinberg College of Arts and Sciences at Northwestern.

Nanotechnology promises to bring materials together in new ways, forging new capabilities by design. One potential application for crystals built of nanoparticles, such as these newly reported ones, is the control of light — nanoparticles interact well with light waves because they are similar in size. This could lead to materials that can change colors or patterns on command or block certain wavelengths of light, while transmitting or amplifying others. New types of lenses, lasers and even Star Trek-like cloaking materials are possible. 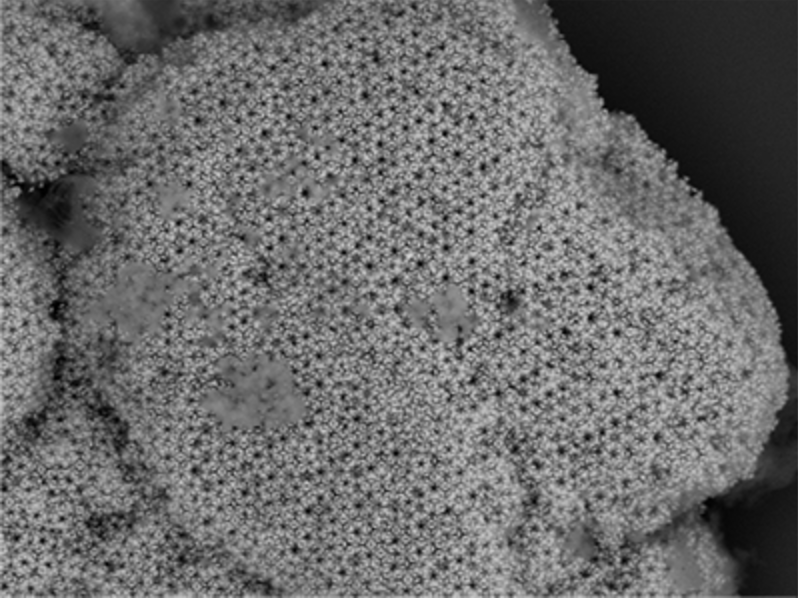 IMAGE:  An electron microscopic image of the surface of a crystal. Photo: Mirkin Lab, Northwestern University.

“This work shows that nanoparticle crystals of extraordinary complexity are possible with DNA technology, once one begins to exploit particle shape,” said Sharon C. Glotzer, the John W. Cahn Distinguished University Professor of Engineering and the Stuart W. Churchill Collegiate Professor of Chemical Engineering at U-M. “And, it’s a great example of what can be achieved by experimentalists and simulators teaming up.”

The study, titled “Clathrate Colloidal Crystals,” will be published March 3 in the journal Science. Mirkin and Glotzer are co-corresponding authors of the paper.

In chemistry, clathrates are known for their chambers that can house small molecules. They have been used for capturing pollutants from the environment, for example. The nanoparticle clusters also leave room for cargo, which the authors suggest could be useful for storing, delivering and sensing materials for environmental, medical diagnostic and therapeutic applications.

While natural materials exhibit a dizzying array of crystal structures, most nanotechnology labs struggle to get past simple designs. The structures produced by Haixin Lin, now a postdoctoral fellow in Mirkin’s lab, are far more interesting. The new structures are composed of clusters of up to 42 particles, forming larger polyhedral, such as the great dodecahedron. These clusters connect into cage-like crystal structures called clathrates.

Still, the story isn’t the crystal itself: it’s how the crystal came to be. Mirkin’s group has pioneered many structures through the use of DNA strands as a sort of smart glue, linking nanoparticles together in a particular way. The particle is both a building block and a template that directs bonding interactions. Meanwhile, Glotzer’s group has championed the role of nanoparticle shape in guiding the assembly of crystal structures through computer simulation. 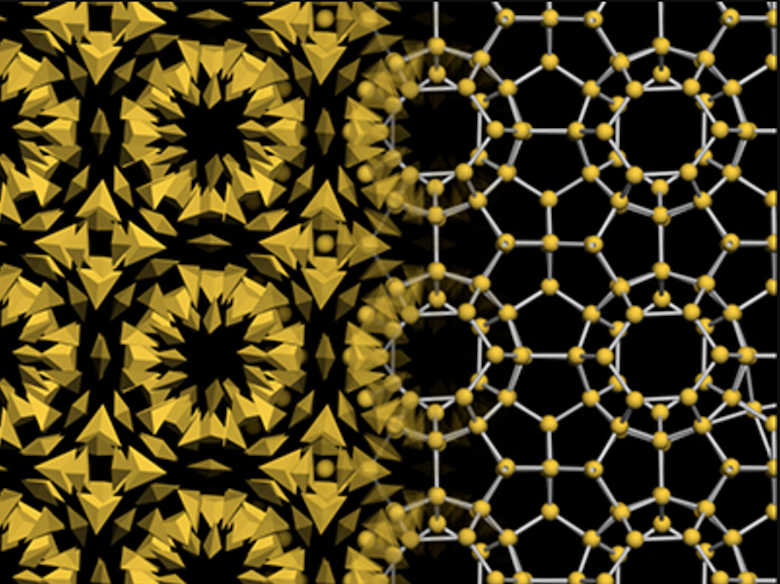 “Chad’s group got the idea of exploring new phases by looking at predictions we had made,” Glotzer said. “One day, I got a phone call from him. ‘We just got these incredible structures!’ he said. And he texted me micrograph after micrograph — they just kept popping up. He said, we need to figure out a way to definitively assign their structures.”

The electron microscope images, or micrographs, showed complex crystalline structures that formed in large part thanks to the shape of the gold nanoparticles. The triangular bipyramidal shape, like two flattened tetrahedrons stuck together at their bases, was similar to a shape Glotzer’s group predicted would form a quasicrystal. Quasicrystals are prized in the field of nanoassembly because they are as complex as crystals get.

Lin’s shape had just the right angles to make clathrate structures, which often turn up in molecular systems that form quasicrystals. But to do so, they needed strands of DNA attached to their sides at just the right length.

Lin systematically made the gold bipyramids of consistent size and shape, with edge lengths of 250 nanometers — half the wavelength of blue light. He then modified them with different length sequences of DNA. When the DNA strands were too short, the nanoparticles made disordered, ill-defined structures. 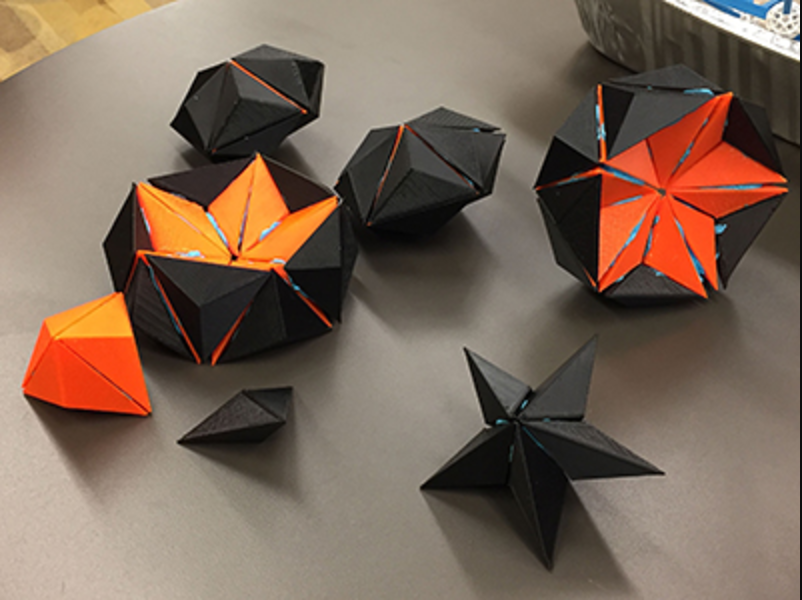 IMAGE:  Once the Glotzer group received the electrom microscope images from the Mirkin lab, they 3D printed the flattened bipyramids and glued them together to explore lively crystal structures. Photo: Glotzer group, University of Michigan

When longer strands produced exotic patterns in the electron microscope images, Lin brought the results to Mirkin, who was both thrilled and intrigued.

“These are stunning — no one has made such structures before,” said Mirkin.

It was clear they had made phases never observed before, but getting the structure accurately identified was essential. After Mirkin alerted Glotzer at U-M, Sangmin Lee and Michael Engel 3-D printed Lin’s bipyramids and glued them together to explore how they might make the structures in the electron micrographs. Lee is a doctoral student in chemical engineering, and Engel was then an assistant research scientist, both in Glotzer’s group.

Once they saw how the shapes fit together, they hypothesized the clathrate structures. To confirm their suspicions, they built a computer model of the hypothesized clathrates from bipyramids and compared it to the Northwestern micrographs. It was a perfect match.

As a definitive test, Lee and Matthew Spellings, also a doctoral student in chemical engineering at U-M, developed a molecular model of the DNA-linked nanoparticles. Lee carried out simulations to confirm that the particles would indeed form clathrate structures.

“To really know for sure, we had to run simulations that mimicked the conditions Haixin used in the lab to see if a disordered fluid of DNA-linked bipyramids would assemble into the Northwestern crystals,” Glotzer said. “Once we saw the computer crystals, I knew we had nailed it.” 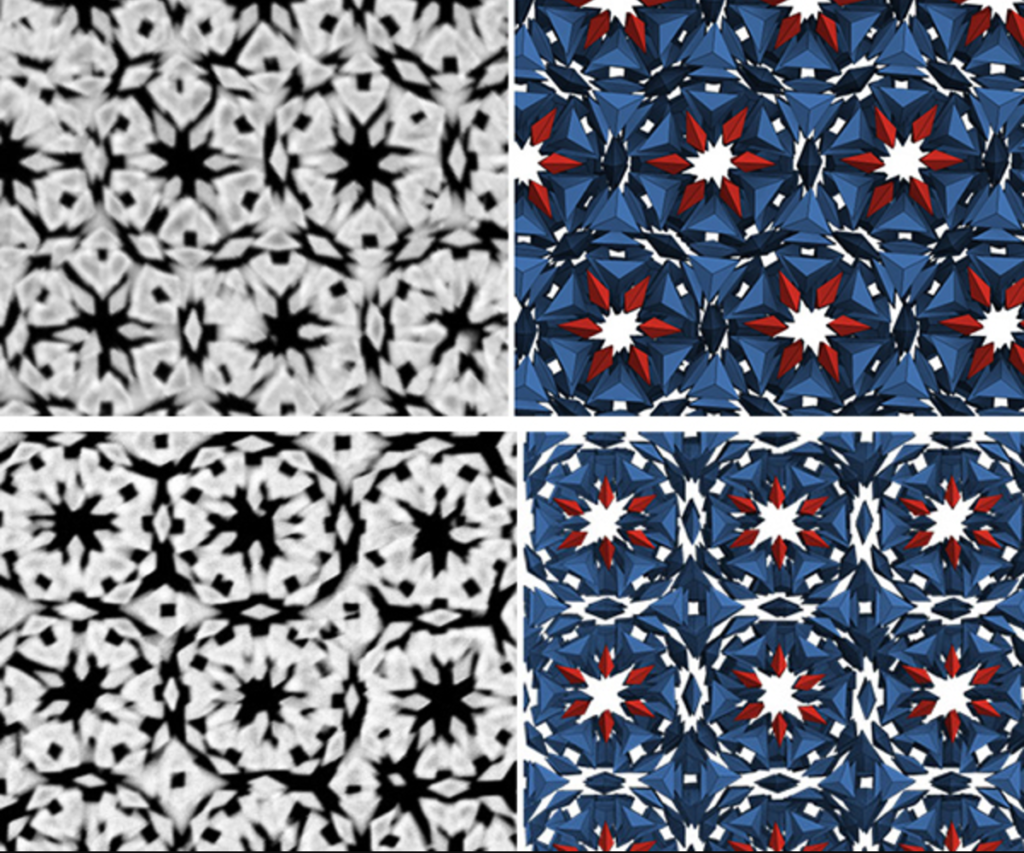 Mirkin is director of Northwestern’s International Institute for Nanotechnology as well as director of the research group that invented the chemistry for conjugating DNA and nanoparticles and a pioneer of the concept of programmable colloidal crystallization with nucleic acids. In 1996, he introduced the concept of using nanoparticles as atoms and synthetic DNA as a chemically programmable bond to make designer materials based upon the ability of the particles to recognize one another through sequences immobilized on their surfaces. Mirkin has been experimentally studying the role of particle shape in colloidal crystal formation for the past two decades. He is also a professor of medicine, chemical and biological engineering, biomedical engineering, and materials science and engineering.

Glotzer is nationally recognized for groundbreaking computer simulations demonstrating the important role of shape in nanoparticle self-assembly. She leads the research group that discovered the enormous diversity and complexity of colloidal crystals possible from simple polyhedral shapes. Glotzer is also a professor of material science and engineering, macromolecular science and engineering, and physics.

The study was supported as part of the Center for Bio-Inspired Energy Science, an Energy Frontier Research Center funded by the U.S. Department of Energy (grant no. DE-SC0000989). Computational resources and services were supported by Advanced Research Computing at the University of Michigan, Ann Arbor.